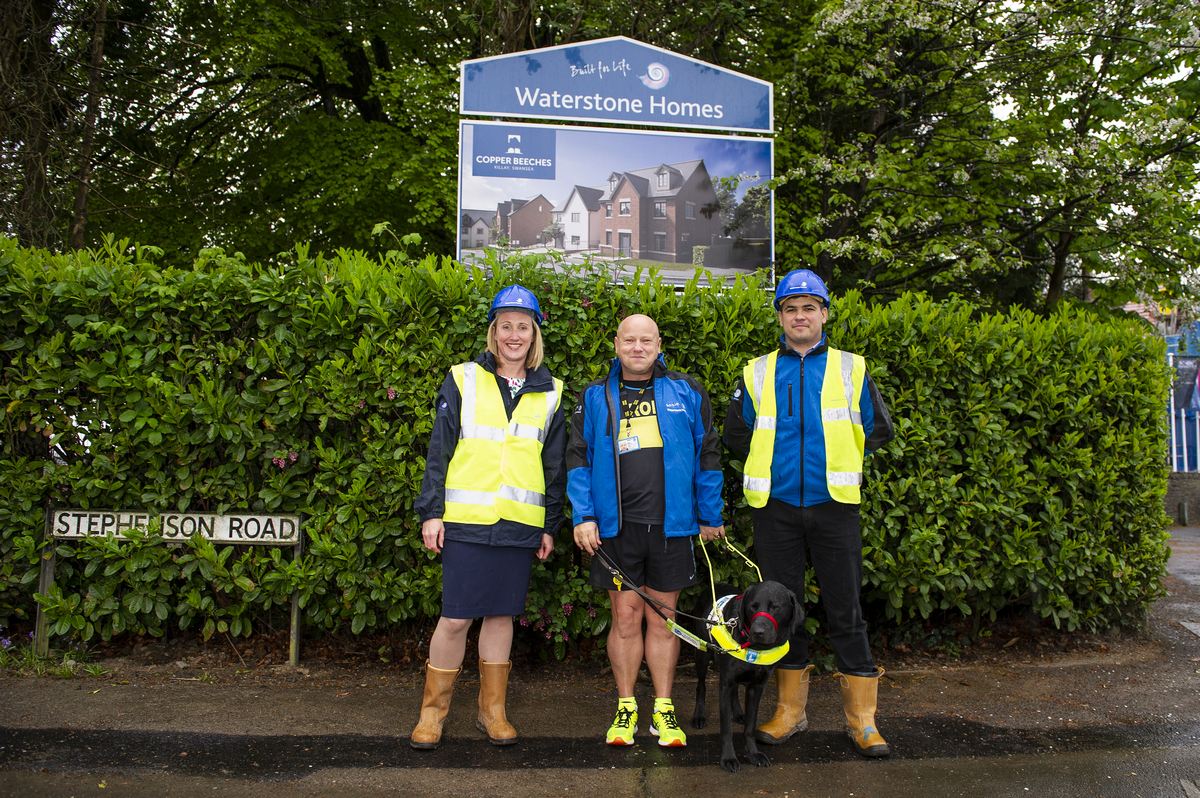 Welsh housebuilder Waterstone Homes has donated hundreds of pounds to help a Swansea man achieve his dream of running a marathon, four years after losing his sight.

The housebuilder, which is committed to helping people living in the communities that it builds within, sponsored Killay resident Robert Pritchard £250 to run the London Marathon in aid of Guide Dogs UK.

Despite being severely visually impaired, 51-year-old Robert, who lives next door to Waterstone Homes’ latest residential development, Copper Beeches in Killay, completed his first marathon with the help of a guide runner in an impressive time of 4 hours and 37 minutes.

Born with a degenerative eye condition, Robert’s sight had continued to deteriorate throughout his life, eventually resulting in him becoming registered legally blind in 2015 aged 47. The change left him feeling isolated and depressed.

Robert said: “I had always had bad vision, but when my sight degraded to the point that I was almost totally blind, I felt completely lost. I went into a dark place and suffered with depression. I knew I needed to do something and decided to turn to running as it was something I had loved before.

“I was determined to run once again and was assigned my guide runner, Hoss, and everything has changed. Hoss taught me how to run again and I was amazed at how quickly I adapted. Running gives me a sense of freedom and I love how it makes me feel.”

Starting off with short runs, Robert slowly built up his running distance over time, before setting himself the ambitious goal of completing a marathon – something he had always wanted to do. Soon after he signed himself up for a place at the London Marathon through Guide Dogs UK.

As well as completing the marathon for his own personal reasons, Robert wanted to help a cause important to him. After seeing the positive impact that his guide dog, Pricey, a two-year-old Labrador, had had on his life since he welcomed him two years ago, Robert wanted to show his appreciation for Guide Dogs UK and decided to raise money for the organisation.

He explained: “Pricey has completely changed my life. I am able to do so much more because of him and am thankful for him every single day. He has had such an impact and I wanted to do something to give back to Guide Dogs UK and show my gratitude.

“I am overwhelmed by all the support that I have received and the amount of money that has been donated to me and my guide runner. I didn’t think I would ever be able to run a marathon after losing my sight, but this experience has been amazing. I am so thankful to Waterstone Homes and everyone else who has supported me and enabled me to raise so much money for a charity that is close to my heart.”

In total, Robert has raised more than £4,000 for Guide Dogs UK. The keen runner is already planning his next sporting ventures, having booked his place at the Swansea half marathon in June as well as Greece’s Athens marathon this November.

Andrea Gardner, Sales and Marketing Director at Waterstone Homes, says: “When we heard about Robert’s story, we wanted to do all we could to help him achieve his target for Guide Dogs UK. It’s important to us to support the community and help local residents as best we can.

“Robert is an incredibly inspirational man and has an amazing story. His determination to run the marathon and his passion to help others is truly admirable, and we’re happy that we could help in some way.”